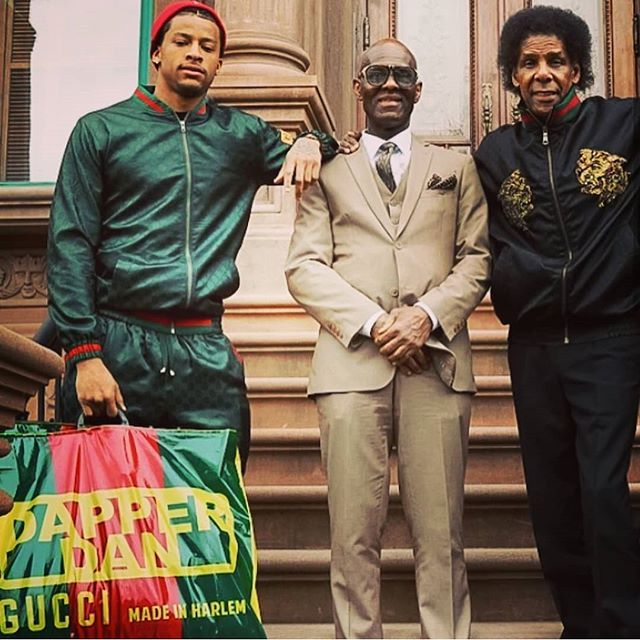 Tailor Daniel Day, better known as Dapper Dan, is known for outfitting ’80s hip-hop icons in custom kits riffing on high fashion brands like Louis Vuitton and Gucci, who eventually sued his independent shop out of business for copyright infringement. But decades later, Dapper Dan’s memorable pieces are influencing what goes down the runways more than ever.

The New Yorker’s version of the American Dream is only slightly different than the overarching ideal of owning a house that your family can pass down from generation to generation. The city has long praised the self-made individual, whether it’s a hustler who goes legit after a few brushes with the law, or the street-smart smooth talker who works his or her way up from the bottom of the ladder to the corner office.

Daniel Day, better known as Dapper Dan, occupies a space between those two archetypes. He grew up in Harlem, on 129th Street and Lexington, in humble means. He went to an elementary school three blocks away from where poet Langston Hughes lived. Whenever his mom won some money from scratch-offs, she’d treat him to a new pair of shoes. Soon, he was taking matters into his own hands, running the streets and shoplifting with a crew that included Richard “Pee Wee” Kirkland, who would go on to become a street ball legend.

Kirkland’s basketball talent caught the eye of the NBA, and the Chicago Bulls attempted to draft him in 1969, but he turned down the offer because the streets were already paying him in full. The drug game had a more handsome immediate payoff than professional basketball could. And this was the underworld where he and Daniel Day would cut their teeth, playing craps, gambling, and hobnobbing with uptown gangster greats like Nicky Barnes.

In fact, Dapper Dan earned his name not just from his signature sense of personal style, but because he hustled it from its previous owner—an older gambler who Day bested in craps. In a New York Times profile, Day says the man crowned him “the new Dapper Dan.” As for the older gentleman, he decided to go by “Tenor Man Dan,” since he happened to be a tenor saxophonist.

For Dapper Dan, style wasn’t just about self-expression. It was about embodying power and masculinity. As he puts it, a lot of the influence comes from the Southern United States, where prominent families ended up settling in the North.

“Those are the ones that said, ‘I’m gonna make it here, and I’m not gonna go back,’” he says. “A greater sense of fashion evolved among us that became like a powerful vehicle to all the people in the different areas of the South that we came from.”

In Harlem, masculinity informed the uniforms of some of the neighborhood’s most influential groups. The Black Panthers were usually clad in black leather blazers, powder blue shirts, black trousers and black berets, and their nattier counterparts, the Nation of Islam, often wore suits over crisp white shirts with bow ties and acetate-framed glasses. But in terms of burgeoning hip-hop style, underworld antiheroes like gangsters and drug dealers were the original style icons, using their gains to outwardly express their financial success.

Indeed, in the early ’80s, hip-hop and braggadocio went hand-in-hand. Rappers wanted to look powerful and successful, so their outfits had to convey the same messages as their lyrics. A strong DIY aesthetic inspired by graffiti writers led to pioneers like Shirt King Phade gaining attention for his eye-popping airbrushed T-shirts and jeans, turning street art into early streetwear. It wasn’t uncommon to customize tees and jackets with iron-on letters to symbolize what crew you were representing. Slick Rick, Doug E. Fresh, Big Daddy Kane, and Eric B. and Rakim were all known for their flamboyantly masculine sense of style, pairing luxurious Bally shoes with layers of gold chains, cozy sweaters and casual sportswear from Nike, Fila and adidas.

But the high fashion houses they aspired to wear weren’t even speaking to the same audience as their music. Enter Dapper Dan, who opened his boutique at 43 125th Street in 1982. Like many of his customers that happened to be rappers, he was sampling street-ready silhouettes and mixing in pops of high fashion.

“The clothes just didn’t match the message and the sampling that the young people were bringing about,”

“The clothes just didn’t match the message and the sampling that the young people were bringing about,” says Dap. “They needed something that was consistent with the attitude and the approach toward their reality. And that wasn’t there for them.”

Brands like Gucci, Louis Vuitton, MCM and Fendi were already popular amongst the hip-hop community, but many of its members couldn’t even fit into the ready-to-wear offerings. So what Dapper Dan did was put these brands in a new context, combining covetable fashion houses with more generous fits and shapes that spoke to a younger, more discerning audience. And more importantly, he turned the clothes into wearable status symbols.

“The symbol of success is in the logo. I mean you could wear the fine garments, but kids would need to know that these garments cost money,” he explains. “The more of the logo you have, the more expensive the garment seems, and it looks like you arrived. The logo was saying: ‘Okay, I made it.’”

In addition, as Nas points out in the 2015 documentary Fresh Dressed, what Dapper Dan offered his customers was a certain unpretentiousness, and like any good tailor, a more accurate understanding of what his clients wanted. Sure, there were people in the hood fortunate enough to be able to step into a Louis Vuitton or Gucci boutique and cop some gear, but, at the time, they were treated much differently than the labels’ typical old-money customer. Not to mention, their selection was limited to just select leather goods and accessories, not full-on ready-to-wear collections, which would only begin to be introduced by labels like Gucci and Louis Vuitton in the early 1990s. In the same documentary, Dap describes what he did as “black-inizing” the appeal of these labels, making them look even better on his customers than the brands themselves.

A corner features a photo of one of Dap’s more famous pieces, a fur-paneled, balloon-sleeved jacket with Louis Vuitton monograms on the sleeve designed for Olympian track-and-field athlete Diane Dixon.

This same jacket would come back into prominence when Gucci’s Alessandro Michele presented a similar design on the runway in its 2018 Resort collection. In response, Gucci contacted Dap, and through a deal brokered by Jelani and Steve Stoute, CEO of brand development firm Translation, recently confirmed it is not just collaborating with Dapper Dan, but reopening his Harlem atelier, later this year, where he’ll have access to genuine Gucci fabrics to make officially licensed bespoke creations.

It’s ironic that his logo-laced designs are finally being proven as ahead of their time. But there are two main reasons Dap thinks that super-prominent branding is so relevant in modern fashion.

“There’s nothing that over the last 30 years that has been able to replace the logo. Logomania, it’s almost like it’s here to stay,” he says. “Nothing signals success more than your logo. I mean, if you had a Rolls-Royce and you didn’t have ‘RR’ on it, it’s not a Rolls-Royce.”

Dapper Dan’s DIY approach to fashion aligns with how Ferg and the A$AP Mob have taken the garments available to them, and put that clothing in a new context. Dap was taking symbols and pieces and translating them for the streets, while A$AP Mob’s legacy is taking runway garments and wearing them in their own way. And it’s exactly why A$AP Rocky has collaborated with labels like Guess and J.W.Anderson and has been the face of a prestigious house like Dior.

Dap couldn’t be prouder of the ascension of Harlem’s new fashion guard. They’re expanding the path that pioneers like him paved, and hip-hop culture has gone from looking up to fashion labels to one of the most important influences in modern style. Dapper Dan may have been the first to translate the language of fashion into hip-hop vernacular, but the A$AP Mob is expanding the lexicon.

All credits of this article goes to Jian de Leon and Highsnobiety who is owner of the original article. Read full article here.